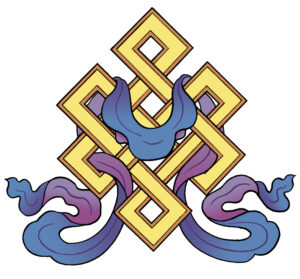 It is common these days for people to refer to karma. People say that something is ‘good karma’ or ‘bad karma’ or ‘it’s your karma!’. In general, the idea that your actions have good and bad results beyond the immediate moment is correct, but there are probably a number of misconceptions about the general understanding of karma worth correcting.

All our experiences, our bodies, our relationships, our environments, and our happy or unhappy states of mind all come from the karma that we have created. In Buddhism there is no other creator.

Karma is either positive or negative. Positive karmas are motivated by positive states, for example love, compassion, generosity, patience and wisdom. These result in positive experiences and happiness for us.

Negative karmas are motivated by negative states, for example hatred, attachment and jealousy. These result in negative experiences and suffering.

Thus, according to Buddhism, there is no one running things or making judgements about our actions. No one is giving out rewards and punishments, no one is creating our environments and experiences. When we create a cause, it naturally brings a result that corresponds to the type of cause we’ve created.

A misconception is to think that when someone is experiencing some form of suffering that they are getting punished because they are a bad person and they previously did a negative or destructive or harmful action.

This is completely the wrong idea of karma in Buddhism.

First, there is no one organising the suffering as a punishment. It is just the nature of the result of the action that has been created. If you plant an apple seed, you will get apples and not oranges. It is not a reward and not a punishment.

Second, there is no concept in Buddhism of anyone deserving suffering. While actions may be harmful, it doesn’t mean that we are bad people. Buddhists make a distinction between the action and the person who does the action.

In Buddhism, we believe that all beings have Buddha potential. But their minds may be filled with delusions which obscure their Buddha potential and so they act in harmful ways. It doesn’t mean that they are evil or bad people.

Also, just because someone made a mistake it doesn’t mean that they are getting punished. Karma has nothing to do with deserving suffering. There is no idea like this in Buddhism at all.

For example, a doctor may diagnose us as being sick because we have a particular virus. The doctor didn’t create the virus. The doctor just described it. Once we know the diagnosis, then we can do something about the illness. This is the role the Buddha played in explaining negative karma, so that we can learn how to remedy our negative actions.